Hi, I’m Gina and I am bisexual – this may or may not be the first time you are hearing this, but it is most definitely not the first time I have said this.

I’ve known that I was attracted to both men and women from a very young age, even if I didn’t have the terminology for it. I spent most of my youth under the presumption that people are either gay or straight, and there weren’t really any other options. I always liked boys and never had any trouble feeling comfortable around them, so in my head that meant I must be straight. Sure, when I was alone I spent time finding Tumblr videos of girls kissing, but I was kissing boys in real life, so come on I must be straight, right????

If you get super super technical, the first person I ever kissed was a girl. I don’t really consider this my “first kiss”, because we were just little girls playing stupid games and it wasn’t anything meaningful – I may not have even been 10 years old yet. In middle school I started kissing boys and having boyfriends, and I was always a little ahead of my friends in terms of “experience”.

In high school, I had a female friend who I got super close with, got drunk for the first time with, and had my first lesbian experience with. The experience itself was very PG, but this was the first time where I was kissing a girl who was kissing me back and it was intentional – even if heavily influenced by alcohol. After my straight guy friends learned about this, there was a lot of encouragement whenever we were drinking for me to make out with the other girls. I happily obliged of course, but I continued to date guys exclusively. By the end of high school, I had probably kissed just as many girls as I had guys, but I only had experience past that with the guys, and I had never been romantically involved with a girl.

This didn’t change much as I entered college and I continued to be involved with men romantically, but fantasizing about women in my alone time. I was still under the impression that I was straight, I just figured I was more sexually open than most people. I believed myself to be more open in general than most, so I didn’t put too much extra thought into my sexuality as a whole.

Enter the world of Tinder. Tinder became a thing sometime while I was still in college and it was common on my campus. As I set up my profile to start swiping, I was faced with filling out some preferences:

Are you interested in:
○ Men
○ Women
○ Both

That’s when things clicked for me. That’s when I stopped thinking that I had to be on one side or the other, either gay or straight, and maybe I could actually sit somewhere on the fence.

I clicked both, and started swiping on both men and women.

For a while, this was just an internal thought. I hadn’t fully identified with the word “bisexual” yet, even if I had rolled it around in my head a few times. Even though I was matching with and talking to girls on Tinder, I wasn’t meeting up with any of them in real life and was instead still spending my time involved with men. I even started dating someone towards the end of college, and I would think to myself, “I’ll explore girls more if/when we break up.” In my head, I had put my sexuality on hold (even though I was still swiping and talking with girls here and there when my boyfriend was being a dick).

By the time we broke up, I was sure that this was something I wanted to explore. I had had plenty of experiences with men, and I wanted to bring my female experiences up to par. I started hooking up with a girl that I had a crush on who was sort of in my friend group and identified as a lesbian. When our friends first got wind that we were a thing, they asked me if I was a lesbian also. This was the first time I said the words out loud: “Nope, I’m bi.”

Since then, I’ve dated both men and women openly and happily. I spent over a year in a relationship with a man, and now that I am single again I would like to focus more on being with women. I believe my sexuality will always be fluid and I will always pride myself in having an open mind and an open heart.

That’s as much of a “coming out” story as I have so far. My friends have kind of organically learned about it over the past several years as I told them about my involvement with different people. I’m open about it with new people I meet and become involved with. My coworkers all know I am openly bisexual and I even indicated this in my voluntary demographics.

However, I never had that serious sit down with my parents (if you’re reading this – sorry, Mom and Dad!) where I look them in the eye and tell this deep dark secret that I’ve been hiding for years and wait to see if I still have their approval. It’s not like that for me – it wasn’t something I was ever “hiding”, it was something I was still figuring out. I also don’t need anyone’s approval about it, not that I think anyone would really have an issue. I’ve spent a lot of time thinking about telling them in some way that was maybe more casual, but it’s been hard for me to conceptualize the right words. There’s a lot of stigma that comes with the word “bisexual” (watch the Hulu show, The Bisexual), and I think this could be potentially difficult to navigate with my parents. That being said, I want to be open and honest with my family. I would also feel bad if they were to learn about it from someone that wasn’t me, making them feel sad that I wasn’t the one to tell them. Maybe I’m dealing with having some feelings of guilt or something, that’s for my therapist to figure out. The point is that I have gotten to a place now where I would like them to know.

So, instead of coming out in some formal way, I’ve been passive aggressively reposting outwardly bisexual things to my Instagram story and allowing my family to view them. Not kidding – my parents both have Instagrams and see everything that I post and I’ve just been making it semi/extremely obvious: 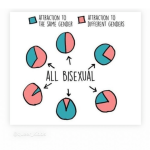 Am I being too subtle?

So yeah, that’s my experience so far. To be honest, I feel pretty good about it overall. And I’m excited about what is to come in the future.