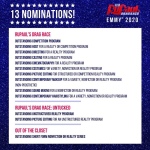 Okay, I know I’ve really been going HARD for RuPaul and Drag Race lately. But guess what? I’m not the only one giving this show some major buzz. Especially considering the show has just been nominated for 13 Emmys!! Last year, they had 14 nominations as well, and in both 2018 and 2019, the show first won big for “Outstanding Competition Program”, and RuPaul won for “Outstanding Host for a Reality Program”. Again, this year had a list of 13 nominations:

Out Of The Clost:
Outstanding Short Form Non Fiction Or Reality Series 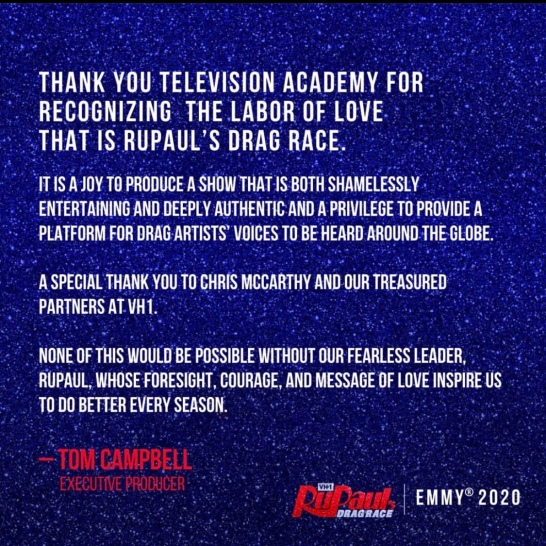 The 72nd Primetime Emmy Awards will be hosted by Jimmy Kimmel; Tune into ABC on Sunday, September 20th, 2020 to watch.

Being a die-hard fan of both Dancing With The Stars and Queer Eye, I was so excited to hear that Karamo Brown would be a contestant on this upcoming season. You may know him as “Crazy Karamo” from MTV’s The Real World, “culture expert” in the Fab Five of Netflix’s Queer Eye, and now Jenna Johnson’s partner on DWTS. Because I’m somebody who takes a deep dive into everything that I love, I ordered Karamo’s book, and I actually read the entire thing in one sitting.

Within the first 10 pages, I could feel Karamo’s charisma, positivity, and enlightenment radiating through the words. The way he writes is so light and refreshing, and his life has proven to be wildly interesting. He is concise, clear, and incredibly wise and reflective. It was empowering to read such amazing things from a member of the LGBTQ community and from someone whom I value and admire so much.

I’m inspired by Karamo’s ability to openly admit and own up to his mistakes. I’m wildly impressed by him, and I hope to be able to work on taking accountability for my own actions as a result. Karamo admittedly has a number of things to apologize for, but he does just that with eloquence and grace. I also loved Karamo’s thoughts on the term “letting people in” rather than “coming out” in the LGBTQ+ community. His ideas were something I related to IMMENSELY and appreciated completely: 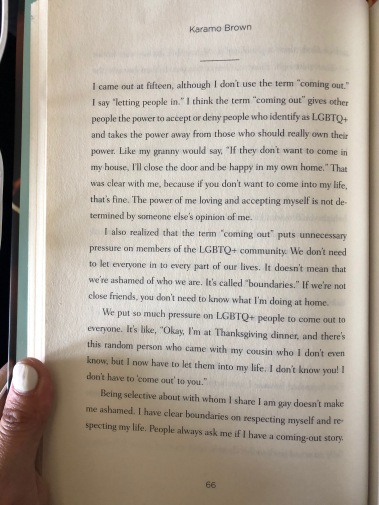 I basically cried while reading about his relationship with his fiancé, Ian. Not just because of how adorably in love they are, but also the dynamics and interactions between him and Karamo’s sons. Karamo proposed on Ian’s birthday, just after his son’s Jason and Chris announced that their gift was that they want to call him “Pops”. Family was a clear, present, and fascinating topic for Karamo throughout the book, and Ian completed this part of him. Their relationship is truly beautiful.

There was a lot of push back at first for Karamo on Queer Eye, because he wanted to be the “culture expert” that’s really more of a life coach. The previous culture expert from the original show focused more on arts, museums, plays, etc. in terms of “culture”, but Karamo had a clear goal and intention for what he wanted this role to be. It breaks my heart to hear the negative feedback he first got, as a result of the network not being unified on the vision for his expertise on the show. As a viewer and fan of the series, I feel as though I understood Karamo from the beginning. Even in the very first episode, from which he claims his interactions were largely cut, I could see that Karamo’s impact was present and important. I see you, Karamo! Work, girl!

I absolutely loved Karamo’s book. It was quick, full of wisdom, and provided me with a new insight into who he is. You can binge watch Queer Eye on Netflix over and over again anytime – and I highly recommend you do so. Of course I also HIGHLY highly recommend Karamo’s book, which can be found wherever books are sold. Also – please vote for him on Dancing With The Stars this season! (Mondays at 8:00 PM on ABC.)

SUMMER TV IS HEREEEE!!! Now that it’s officially June, there are so many new shows starting up. ESPECIALLY GAME SHOW REVIVALS!!! I am so excited. My friend has recommended the app TV Time to me, where you can track your favorite shows and get notifications when new episodes are being released. Here’s what I’ll be adding to my watch list for summer:

Monday, June 3rd:
So You Think You Can Dance – FOX

If you are not watching the show Grown-ish, start now! Actually, start with Black-ish for some context, then quickly binge your way through Grown-ish afterwards. Black-ish, starring Anthony Anderson and Tracee Ellis Ross, was created by Kenya Barris and airs on ABC. It’s about a black father who is creating a sense of ethnic identify for his children who are sometimes receptive and other times create their own way of navigation. The show is superbly relevant and covers topical issues in a really incredible way. Grown-ish, starring Yara Shahidi, is the extremely relatable spin-off show, in which we follow the oldest daughter, Zoey, through her college endeavors. The show is a very accurate depiction of some of the issues with college, including experimenting with substances, sexuality, and career goals.

Season 2, Episode 5 of Grown-ish is called “Girls Like You”, and aired on 1/22/19. The episode focuses on Zoey’s friend Nomi, who is a bisexual female coming into her own. I relate to Nomi’s c

haracter, played by Emily Arlook, not just because she is bisexual, but also because she is a free spirit and is totally imperfect. I also really appreciate the way that the show has depicted her character as truly bisexual, showing her with a variety of people. It’s been really empowering for me to see her with a male interest in one episode, (where they actually explore the unfair stereotypes associated with male bisexuality) and also explore relationships with women later in the season. She’s not seen as “experimenting” or “going through a phase” – *INSERT MY GIANT EYE ROLL HERE* – she’s literally just living. And I’m here for it.

The episode starts out by going through annoying (yet hilarious) roommate habits, including using the bathroom while others are present or passive aggressive Venmo requests. Then we go through something most college roommates experience – hook ups. Except, Nomi’s roommates think that she is having too many, and they are concerned about the way in which she is seducing these women.

Please let me just say – this episode was amazing to watch. I simultaneously wanted to be Nomi but also wanted to go home and spend the night with her. Of course, there was a

lot that was exaggerated here as a result of the “player” attitude that the show has given her and the idea that everyone experiments in college. But it also highlighted some really important ideas, stereotypes, and conversations. One of Nomi’s friends gives her a hard time because the way Nomi is acting by hooking up with lots of girls without meaning reminds her friend of typical “dude” behavior. She can relate to the girls on the other end of the hook ups, and as a result, feels some type of way about it.

Zoey follows Nomi out to a bar and sees her interacting with a female interest, and realizes Nomi’s super power. Nomi is able to be charismatic in a way that’s relatable but also attractive, which is totally different than flirting with a guy. In the episode, Nomi is using this idea to seduce straight women into their first lesbian experience, knowing that she isn’t going to call in the morning. Zoey helps her realize that part of the reason that Nomi might be acting this way is because she’s comfortable keeping women at a distance, since she has yet to come out to her very conservative family.

THEN. ENTER SHANE. OH MY GOD. (If you see the picture to the right and you still don’t know what I’m talking about – please hand me your gay card, go binge The L Word on Netflix, and you can have it back when you understand why I am freaking out.) Except, she’s not Shane. She’s Professor Hewson, here to teach Nomi all about being gay!!! HAPPY DAY!!!! (I’m sorry, I’ll calm down – this whole thing just made me so incredibly happy.)

That being said, I absolutely loved this episode and this show overall. I hope that they can use Nomi’s character to explore what it’s like to come out as a bisexual. I’m hoping that they continue to show Nomi’s progression and experiences as she navigates her way. Also, I certainly hope that Professor Hewson is not going anywhere anytime soon!

There’s already so many shows that I am keeping up with right now, but I’ve always got room for more! Here’s a super quick list of what is coming out this month that I will be watching: