I hadn’t read A Wrinkle In Time since I was a kid, so when Disney made the movie, I wanted to make sure I reread the book before seeing the film. I couldn’t recall most of the story from memory, and the only thing I could remember was the actual concept of a “wrinkle” in time. I can vividly remember my aunt explaining this idea to me when I was young, using a string to show the visual that was drawn out in the book.

I am somewhat amazed by the vocabulary, especially in the beginning, given that the target age group is 10-14. The story starts off slow and is very vague and confusing, but maybe a younger audience is more okay with unanswered questions and unexplained details. This could also be a result the year we live in, where we lack patience and are used to instant answers. Since the book was published in the 60’s, where fiction often followed the natural literary story arc, it takes a long time to build up the plot.

There’s a lot of room to create the visuals using your imagination as a result of this vagueness. I’m happy for this reason that I reread the book prior to seeing the film, so that I could compare my thoughts to the images in the movie. I could actually distinctly remember from when I was younger, reading when they went to the two dimensional planet. It was almost something I could conceptualize, but a lot of the talk of a “fifth dimension” was hard to visualize in my head.

The traveling to different planets was some of my favorite parts of the book. Camazotz is one of these planets, where everyone behaves perfectly and accordingly – or else. These different worlds, places and dimensions opened up my mind and imagination when I was younger, and was fun to revisit as an adult. Certain parts of the book got a bit

goofy, which reminded me that this was written for the 10-14 age group. Even the names of Mrs. Who, Mrs. Which, and Mrs. Whatsit are goofy in and of themselves. Also, if they are in fact misses, where are the misters?

Prior to seeing the movie, I knew the cast included Reese Witherspoon and Oprah, so as I was reading I just assumed they were a part of the ‘Who, Which, Whasit’ crew. 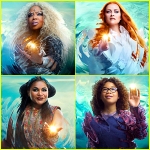 I was correct about my casting predictions – Reese played Mrs. Whatsit, to my pleasant surprise Mindy Kaling played Mrs. Who, and Oprah of course played the wise and knowledgeable Mrs. Which. The movie actually starts out with a scene that includes the dad (oh why hellooooo Chris Pine!), but in the book the dad has already gone and been missing when we start the story. Another small difference was that Charles Wallace was adopted in the movie, but that was not a plot line in the book. However, that could have been just a way to explain the casting choices.

There are some more minor differences from the book to the movie, but nothing too major. They sort of combine “the black thing” into just Camaztoz and IT, throwing all the evil into one world and one thing rather than several dark planets and forces that are listed and visited in the book. The Happy Medium is also female in the original story,  but in the movie not only is this character male, but it also turns out he might be ‘Mr. Whatsit’, or at least an interest of the Mrs. (She doesn’t like labels.)

I was honestly happy to see a version of the story where Meg was not so hard on her father, rather than in the book where she is continuously disappointed by his choices once he’s found. It was a minor change, but one that I appreciated. The adventure in the book ends abruptly, but we get a little more of a wrap up and conclusion in the films. The visuals were amazing and beautiful, of course, creating a sense of wonder in true Disney fashion.

I will say that given the time period, it’s awesome to see a notable piece of literature that has a female protagonist, and has stood the test of time. Meg is not just there to look pretty and obey – she is unique and defiant and sure of herself in a way that is relatable. I think she is a wonderful character and role model for young kids, and hopefully the movie as a whole allows kids from different backgrounds to see themselves in one of the children in the movie.

Disney’s A Wrinkle In Time is currently available on Netflix, and can also be watched in a variety of other places as well. The book by Madeleine L’Engle is available wherever books are sold, as well as many others by the author, as this adventure goes on. This is a great story for both kids and adults, and is sure to reawaken anyone’s sense of wonder and imagination.

One thought on “A Wrinkle In Time by Madeleine L’Engle”